Students in higher education – both in Russia and abroad – are one of the most politicized social groups. In 2021, between 25% to 40% of those who took to the streets after Alexey Navalny’s arrest in January were students aged 18-24. Still, this doesn’t mean that everyone in the university community takes an interest in politics, let alone that all of its members share dissenting views.

The first day into the war, things changed. There were dozens of open letters and petitions written by student and university communities. This surge in political awareness wasn’t limited to Moscow and St Petersburg, as it usually had been before: students of UTMN (Tyumen), KFU (Kazan), NSU (Novosibirsk), VyatSU (Kirov), PetrSU (Petrozavodsk) and many other institutions spoke against the war in public statements. Flyers with anti-war messages were being made up from scratch, and all public spaces – from desks and toilets to walls and notice boards – were written over with sharpies. Many students went out to rallies, while others partnered up to support detained peers and help them to pay their fines. Most of them had never been politically active before and rarely or never were involved in protests. Prior to that, some had even supported Putin, thinking of him as a ‘lesser evil’. It seemed like an unparalleled case of solidarity, and, what’s more important, like the first step to something greater.

On March 4, the Russian government imposed military censorship, thus establishing legal provisions for prosecution of everyone who openly criticized the ‘special military operation’ – the so-called ‘fakes law’. The day before, a Telegram channel called Students Against War (SAW) had been created. The first post was a call to come to universities, wearing anti-war symbols. The channel was meant to facilitate ‘independent, but collective action’ by coordinating and gathering information on petitions and visual agitation in universities all around the country. After March 4, open letters became dangerous for their signatories, and posting flyers and ‘quiet pickets’ [1] can now lead to a criminal lawsuit. Despite all this, there was still a glimpse of hope that protest activity could be at least kept at the same level – until it became clear that there would be no more major protests. On March 6, almost 6000 people were detained during nonviolent rallies. Social media was still overfilled with public anti-war statements, but these were becoming less and less frequent, slowly turning into solitary actions. This shattered the morale of most students who were ready to take action against the war.

In order to find out why mass student protests fizzled out, we need to understand the nature of the political student before and after February 24; to understand what students thought about themselves, who did they want to associate themselves with, who were ready to unite with, if they were ready at all.

Students Against War often wrote about anti-war student riots, and mostly French ones. But if you ask a French person about what student protest means for them, they are most likely to recall May 68, or, perhaps, the recent occupation of Sorbonne; if you ask a Russian, they would probably have no answer at all. Despite the vast experience of the Studencheskaya Zashchita (TN: Russian for Student Defense) union in the 1990s, a student is not a political category in Russian consciousness. There were always a lot of students in every political movement; they are one of the most politicized groups in Russian society. Still, student unions and student protest organizations are now a thing of the distant past.

Politicized communities used to appear in universities with a higher profile – the initiative groups of MSU, SPbSU, Bauman University, HSE and UTMN are clear examples of this. [2] People entering those universities expect high quality education and equal treatment; dignity speaks inside them. They show their discontent with the constant ‘optimisation’, reduction of allowances and accommodation, increasing student fees and cutbacks in educational programs; they speak up, linking the problems of their institutions to the current state of Russian politics.[3]

The campaigns of MSU’s initiative group, where Mikhail Lobanov, a democratic socialist, came from, are well-known among Russian leftists. In HSE, every unfavorable change introduced by the administration was countered with mass meetings or petitions of the student community. In 2018, full-scale rallies took place on the HSE campus, but in a few months enthusiasm waned. A plan to secure students’ engagement by creating a union didn’t work out, as the bonds within the organization were too weak to keep activists going. 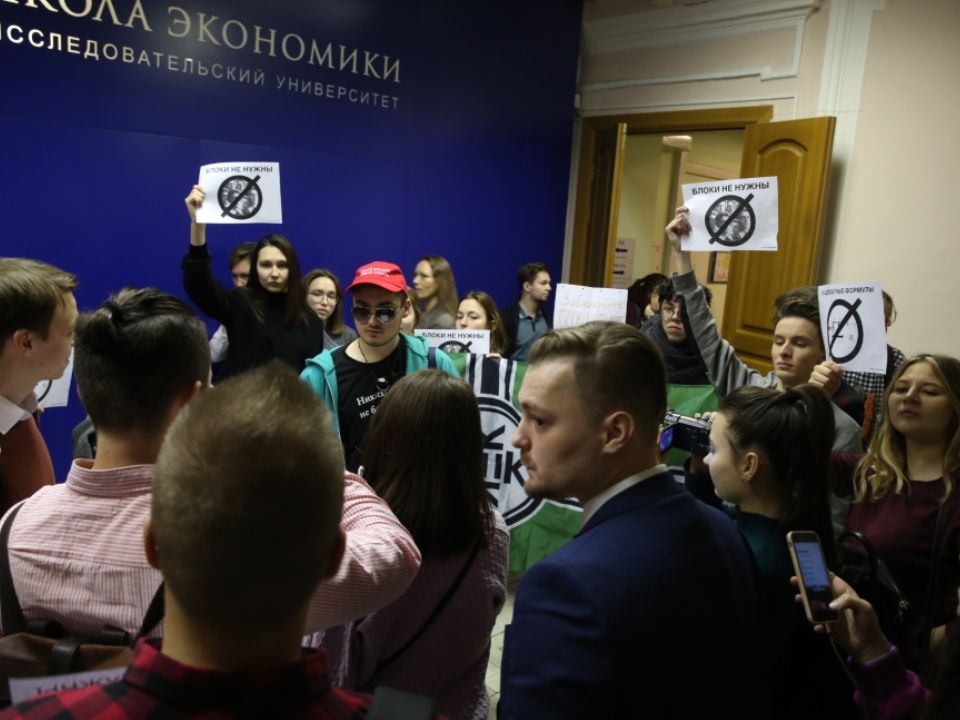 Protests against ‘blocking’ grades in Higher School of Economics, 2018, Moscow

It is impossible to read those tales of old times without comparing them to stories of the anti-war movement: ‘As long as I can remember, it was always like this: firstly there was a triggering event, then we picked up this momentum, and then, after a while, nothing was left of this uplift’ – an activist who has taken part in student protests since 2018 tells us. Our other sources agree: ‘we failed to form an organization’, ‘we can’t coordinate our efforts and figure out what to do to reach a wider audience’. ‘I don’t know who to trust and who I can tell about this no-war-at-all’ – adds a student from FEFU (Far East Federal University).

There is a fog enveloping lecture halls; in this fog only enemies appear and comrades are nowhere to be seen. Students are disconnected and isolated due to the weakness of their specific identity. The small organizational cells inside one institution, made up of close friends, don’t know about each other. This same individualism, letting young protesters risk their own selves, makes them unable to form organizations comprising people outside their circle of friends. At best, they can unite through sharing stronger ideals, whether it be feminism, socialism, libertarianism or anarchism, or by reading the same Telegram channels. The social media space is fragmented, which is why activists supporting Feminist Anti-War Resistance may not know of Student Against War and vice versa.

The ‘fakes law’ and crackdown on protests have paralysed the activist movement. Public resistance is now dangerous, while acting behind the scenes is ineffective. On top of that, until then one could hold onto hopes of the war and the regime soon ending; now, though, no one understands how to defeat the regime. Activists reportedly had no idea of the strategic goal of their actions. They acted because they had to, not because this was part of a coordinated effort.

As a response, Students Against War aimed to consolidate a previously atomised movement by launching protest campaigns via their Telegram channel. This provides infrastructure for decentralized coordination: the only shared entity is the channel itself. It publishes anti-war photos, videos and information, as well as guides and materials for student protesters to inspire future actions.

Students were offered several campaigns with minimal forms of risk, including ‘Books Instead Of Bombs’ and ‘Rector, Withdraw Your Signature!’. The first called for anti-war seminars and study groups, thus helping to overcome atomisation and draw in new people. The second was a response to an open letter by the Russian Union of Rectors in support of the war, which quickly gained popularity. During this time, students posted flyers and stickers, though to no avail: no signatures were recalled from that open letter and the campaign gradually declined. Besides information on campaigns and guides, SAW published texts on student protests of the past: the student antifascist movement, the occupation of ENS in France, and students’ anti-war demonstrations during the Vietnam War. “I didn’t even know students could do that”. One way or another, SAW managed to fulfill the most important goal: to save the anti-war movement in universities. 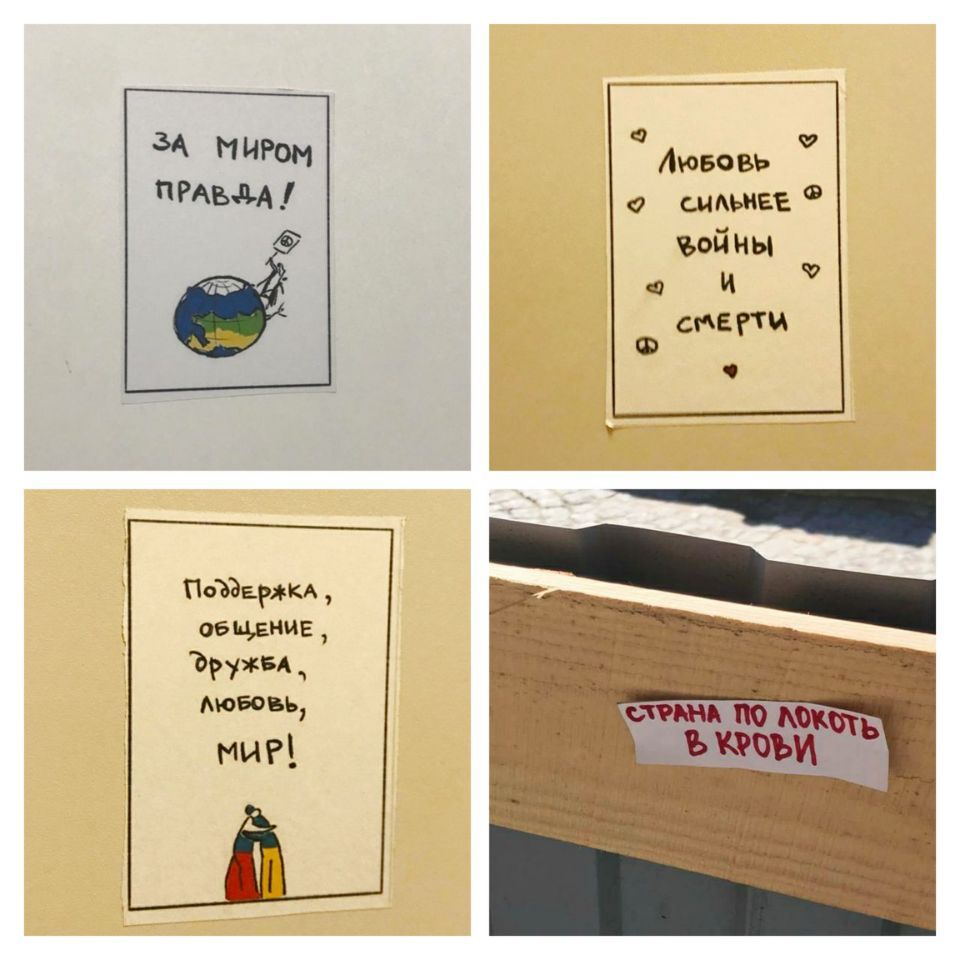 Now, five months since the beginning of the war, it is safe to say that students are ‘demobilized’, having come to terms with a new reality. Many of them decided to take supporting roles: they started supporting refugees, helping to pay fines and writing letters to political prisoners. There is some hope for the coming local elections to mobilize activists. But for now Russian protest is in its war-of-siege phase, which student unions were not ready for.

On May 19, Students Against War were rebranded to the Students’ Anti-War Movement. In a panel discussion held by Posle.media, a SAW spokesperson set the aims of the movement: to provide organizational infrastructure, establish connections, and show options and opportunities for social transformation. Participants also insisted on the need to overcome atomisation, to consolidate and expand the anti-war movement, and to specify visions for the future worth fighting for.

The infrastructure spoken of by SAW should pose a response to burnout, apathy, and anomie in student communities. This infrastructure may become a much needed stimulus for protesters, and help expand the movement, gain experience and prepare to launch initiatives when needed. It is evident in certain local student communities that take every opportunity to act; for instance, when the spam filter of HSE’s corporate email network blocked their messages, activists instantly created a general anti-war mailing list.

But what should this infrastructure look like? Our sources have told us about their desire to turn chaotic and decentralized efforts into organized movement, with cells and programs joined together. They want to not only ally with peers inside their institution, but from all universities, all cities, all around the country. Students are now trying to figure out what they should fight for and how they should motivate others. What will their tactics be? Should they expand the ranks of student activists, or should they ‘go to the people’, as did the Parisian students who got jobs in factories in the 1960s, about whom SAW wrote so often? If they want to step out of the classroom, why not utilize academic resources for anti-war agitation via open lectures and cultural events?

If student organizers want to gain a foothold at university, why not unite with their teachers and use student councils and unions to protect each other from expulsion as best they can? Should they link an anti-war platform with a general democratic and academic agenda - on the most pressing issues affecting universities, especially in terms of management?

Such a network of anti-war activists, expanding both inside and outside the university, would let students take part in a ‘war of positions’ against the current regime and to mobilize the community, when this ‘war’ will finally reach its offensive phase.

[1] An act of wearing protest messages on clothes or belongings while traveling by public transport and continuing everyday activity, invented by Russian activist Daria Serenko, who later wrote a book of the same name about her experiences.

[2] Of course, people are not only protesting in these specific universities. For example, a group from the faculty of history of OmSU (Omsk) has rolled out a campaign against the merging of the faculties of Theology and Physical Education.

[3] While protesting against the Code of Ethics, HSE students referred directly to the dangerous possibility of the code being used by the administration to carry out political repressions.