September (S): To start with, tell us about the history of the organisation and how you yourself arrived at communist views?

Baiel Isaev (BI): Our organization appeared at the end of 2019, when a few people with leftist views created a Marxist circle. We were inspired during the time of the women’s march on 8th March 2019, when among the slogans was ‘Proletarian [women] of all countries unite!’ Later on, there was a stream from Station Marx (a left-wing YouTube channel popular in Russia) about Kyrgyzstan, its current situation and prospects for the left. Contact details were left on the stream, through which we contacted each other and started the Marxist circle KYRGSOC (Kyrgyzstan Socialism). Over time, we got our own site, our own publicity and became a more full-fledged movement.

Personally, I came to communist views through a search for answers. In the beginning, I was an anarcho-capitalist, but one day this belief system stopped answering my questions. For example, even if my ancap views could answer the question ‘Why are some people rich, and others poor’, when it came to countries, I arrived at a dead end. Democracy in Kyrgyzstan seems to exist, there are many talented and hard-working people, obviously, they don’t work much less than in Europe, so why are we poor? Over time, while looking for answers to my questions, I began to approach communist views. The turning point was reading ‘Bread and Freedom’ by Kropotkin, and then the ‘Manifesto of the Communist Party’.

S: Can you describe your perception of the Soviet experience, and the general attitude towards it now in Kyrgyzstan?

BI: In Kyrgyzstan, most people have a neutral/positive attitude towards the Soviet experience, perceiving it as a kind of ‘golden time’ of Kyrgyzstan. The older generation especially, and the younger generation basically do not care. Of course, there are various NGOs working on grants, and they have a clear anti-Soviet and anti-communist character, but their influence on society is negligible. This is understandable, given that the majority of people in Kyrgyzstan are much more concerned about the problems of unemployment and the lack of a social safety net, and the older generation still remember the social gains of the Soviet era.

At the state level, there is no firm position regarding the USSR, but it all comes down to a neutral depiction of that time and the use of the image of the past. For example, the brightest communist and most active participant in the October Revolution in Kyrgyzstan, Zhusup Abdrakhmanov, with this approach becomes a simple patriot who just wanted the Kyrgyz to have their own statehood. One of the leaders of the Kyrgyz SSR, Iskhak Razzakov, allegedly rose to the top due to his patriotism and will, and not the Soviet social elevators and institutions of the welfare state. And so it is with everything that concerns the past of Soviet Kyrgyzstan. A neutral depiction, with the emasculation of revolutionary content and ignoring everything Soviet in the following Union.

As for my perception of the Soviet experience, it is extremely contradictory, but still rather positive. For this was the first socialist state, which through blood, sweat and tears, emerged in agony at the beginning of the First World War, and then having fought off an armed intervention, built its own new, better future. The ideology of the USSR was based on the humanistic values of communism; on equality between people, the elevation of culture, the eradication of illiteracy, the values of democracy, and all this in parallel with the establishment of the Stalinist dictatorship and later, the dictatorship of the bureaucracy. And all these aspects create a portrait of the Soviet period which is very much not one sided, which needs to be studied, analysed, and learned from.

S: What is the structure of Kyrgyz society, on whom can the Kyrgyz left rely and who can they turn to?

BI: The structure of modern Kyrgyz society is like that of many countries in the Third World, through which neo-liberal reforms have skated. There are societal demands for reform, for improvement in quality of life and so on, and beside this stands the question of women. For example, society is periodically shaken by stories of abductions, and the women’s march of 8th March 2021 was completely dispersed by police and tame nationalists from the ‘Kyrk-Choro’ movement.

If we turn to the working class of Kyrgyzstan, we have a million workers earning a living in Russia. This is every fourth able-bodied citizen of the country. With a population of 6.7 million, this is a lot of people. It may seem that in such a situation, the Kyrgyz left cannot turn to anyone, but this is a mistake. In Kyrgyzstan, there are many people employed in the state and public sectors of the economy; teachers, doctors, employees of municipal enterprises, firefighters. In addition, there are also workers employed in the service sector; waiters, bartenders, taxi drivers, couriers. Workers in small industrial enterprises and subsistence farmers in villages, those working for the ‘neo-kulaks’. In a word, all those who live by selling their ability to work.

S: What are the main problems of modern Kyrgyzstan?

BI: The problems of Kyrgyzstan are mainly related to the consequences of deindustrialisation, deurbanization and the dismantling of the welfare state.

The consequence of deindustrialisation has been the total degradation of the economy. This degradation of the economy has led to the fact that a million Kyrgyzstanis, unable to use their ability to work at home, are forced to travel and work abroad. Now, a third of the economy of Kyrgyzstan comes from the remittances of migrants, primarily from Russia. The republic’s budget has also suffered. Even though [the state] is quite socially orientated, if you’re dividing pennies fairly, pennies are still basically pennies.

Deurbanisation also doesn’t help the development of the country’s economy. If in Soviet times (in 1990) 40% of the population lived in cities, now this percentage has dropped to 33%, and the trend shows a further decline. This is because Bishkek is a centre of capital accumulation, to the detriment of other regions in the country. So, for example, if you are from one of the regions, you have two choices: either you stay in the provinces, survive with the help of subsistence farming and lead a semi-proletarian way of life in the city, or you go to work in Russia. This leads to conflicts in the countryside, when neighbours cannot share water for irrigation and no one really has enough. And if this happens in a border region, for example in Batken, this leads to worse conflicts, like what happened last spring in 2021 and in autumn 2022. But all this still does not mean that the city is not growing at all. Bishkek, as the capital and the centre of capital accumulation in Kyrgyzstan, attracts internal migrants, who move to the capital in search of a better life. This gives the city growth, but the growth is ugly, leading to the creation of entire areas of new slum housing. I call this process ‘favelization’.

You cannot even talk about the dismantling of social progress. The 8-hour working day, maternity leave, and other rights exist only on paper, and the state takes a constant active role in the degradation of the labour code of the republic. Free healthcare and education systems have been dismantled.

S: How important, and in what sectors, is the share of Russian and other foreign capital in the country’s economy?

BI: I can immediately think of Gazprom, which occupies a monopoly position in the Kyrgyz market, supplying gas, fuels and lubricants, and the gold mining enterprise “Jeruy”. In addition, there is the ‘Russian-Kyrgyz Development Fund’, which actively lends to new enterprises opening in Kyrgyzstan. But don’t be fooled, the money given is only just enough to improve [Russia’s] image and further exploit Kyrgyzstan as its sales market and a source of cheap labor within the Eurasian Economic Union (EAEU), preserving the backwardness here. For example, after joining the EAEU in 2018, Kyrgyzstan exported products from the light textile industry worth 131 million US dollars. By 2019, exports of such products had fallen to 59 million US dollars. At the same time, less profitable, less technological agriculture exports more than doubled, from 72 to 206 million dollars.

China, on the other hand, acts pragmatically in Kyrgyzstan; as elsewhere, preferring financial to political influence. [China] gives out loans, builds infrastructure and other facilities on credit, and buys the right to process and extract mines.

S: How would you assess the impact of Russia’s war against Ukraine on Kyrgyzstan?

BI: At the start of the war, after the Russian Federation started disconnecting from the VISA system, many of our migrants simply could not transfer money. The number of working migrants was not strongly affected by the war. So, in Russia now, there are around 1 million Kyrgyzstanis.

When Russia announced mobilization, two messages came Firstly, in the Sakharovo migration center, a recruitment center was opened, where migrants can sign up for military service under a contract. Secondly, was a statement by Kirill Kabanov, a member of the Human Rights Council, saying that migrants who received Russian citizenship less than 10 years ago should be obliged to do military service, or otherwise deprived of their citizenship. Moreover, this proposal would apply not only to men who refuse to serve but also to the whole family. And thirdly, on September 20, the day before the mobilization, the State Duma of the Russian Federation adopted a law simplifying the acquisition of citizenship after service under contract. 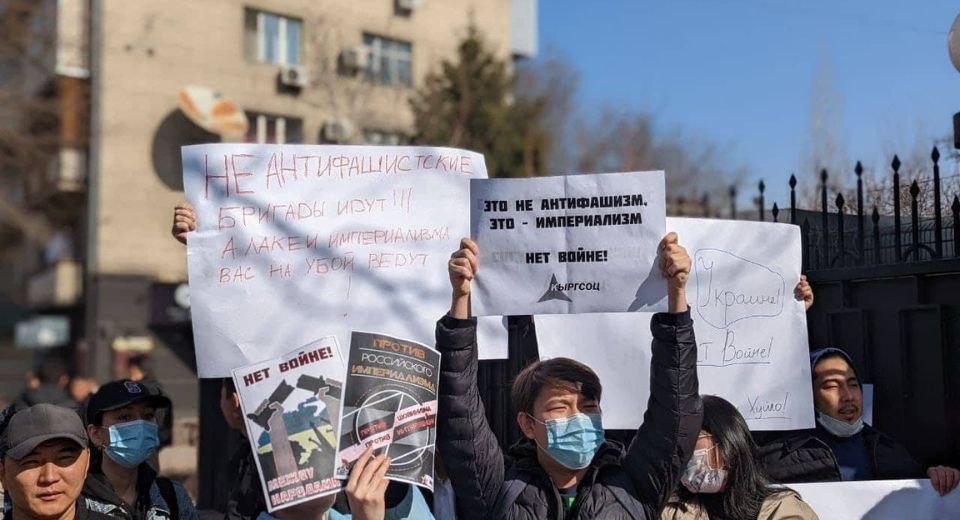 KYRGSOC at the protest against Russian aggression. The slogan on the picket sign reads "This is not antifascism, this is imperialism. No to war!"

This is what happened in Russia. As for Kyrgyzstan, several tens of thousands of migrants have flooded here from the Russian Federation. For the majority, this is a transit point for Georgia or Europe, but given that fewer and fewer visas are issued to Russians, there will certainly be those who want to stay here. But even without that, the massive influx of Russians has affected real estate prices. So for example, renting a house has become three or four times more expensive, and in some parts of Bishkek, the prices are the same as in Prague or Paris. Our landlords, seeing the far more solvent Russians, have begun to inflate prices, and even expel tenants altogether in order to rent [their properties] to Russians. I think this situation will improve after some time, when the Russians run out of that kind of money and either leave or stay here to work and live. There is no impact on the local labour market yet.

S: How would you see the ideal future in Kyrgyzstan?

BI: It depends on how far in the future. Ideally, in the far future, as the classic says, as part of the United Soviet Republic of All Peoples.

And if we talk about the near future, this would be Kyrgyzstan, pursuing a socialist economic policy. I do not think that we could become the new Switzerland or Singapore, but my comrades and I see ways in which Kyrgyzstan could become a more just place for life, combining elements of a planned economy, control of market mechanisms, and the socialization of public life, in the production and distribution of products and resources.